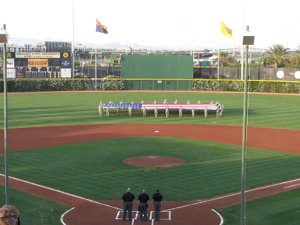 last season with a win in the NCAA Regional tournament.  Both teams are considered premier teams.  The competition starts out for ASU right away.

Tonight marks a couple of notable "firsts."  The game will be played in a new venue.  After playing 40 years in Packard Stadium, on the ASU main Tempe campus, the game venue has changed.  The new site is at the Phoenix Municipal Stadium (the locals call it Muni Stadium), which is approximately 2 miles from campus.  The capacity is about twice the capability of the old stadium.  (Packard Stadium is pictured above.)

Another "first" is the debut of the new 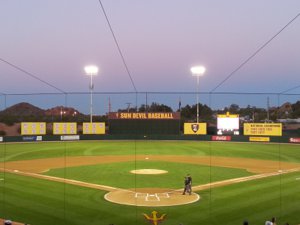 Head Coach Tracy Smith, who is 2-Time Big Ten Coach of the Year from Indiana University.  In 2013, he coached Indiana University Baseball Team to the College World Series, the first time for that school.  Smith has coached baseball at collegiate level for 18 years with over 600 victories along the way.  (New ASU Stadium picture on left.)

ASU Baseball's program is one of the finest in the nation.  Attending a game or two (or a season's worth) is a great way to see high level competition, and to get acquainted with some of the players who will be future major leaguers.  I hope to see you at some of the games!  Perhaps at some games in Omaha too!